A time to celebrate, to rejoice, to let the bells ring loud throughout the land and, and to bring on the pressies! Errrr, that’s a nice snack, thank you Auntie Rachel and Auntie Alice, but it is hardly enough to sustain a big four year old such as moi though. It’s the thought that counts? Well, think a bit bigger thoughts next time, please – parsley AND some lettuce would be jolly good.

Anyway, as I was saying, BRING ON THE BIG PRESSIES – PRONTO! Off you go to the kitchen, Bear, and lock-up the Sherry quick, Mr Bear is on his way – with MY PRESSIES.

Jolly nice card, by the way. Hello, Mr Bear, this is much more like it. How exciting. Move over  – Fairy coming through. Oh wow – what a smashing card from Auntie Debra.

How clever of her to find one with such a stunning picture on it! Woo hoo – another Bear – super dooper – and a very fetching hat too. Thanks, Auntie Debs! Not that I am one to complain, but that Piggy on the card has a very tasty looking apple. You’d have thought there was room in the envelope for a real apple, or two, and a bit a salad, maybe some grass . . . Oh, hang on a minute – what does this extra special fridge shaped parcel contain??? It’s very promising – even the string is tasty. It was only a matter of time before I starred on my very own TV programme.

Perhaps I should hold some auditions for co-stars. Very nice Bear – but I’m not convinced that there is much demand for a virtuoso display of yawning and snoozing – NEXT! Or, to be honest, Pixie and Bear trying to remember the punchline to a very funny joke I told brilliantly ages ago, is not exactly Morecambe and Wise, is it? A compilation of the very best Fairy Stories. Genius!

Sit still you two, no popcorning. What a fabulous day. Lots of super pressies and good wishes from loads of lovely people – thank you very, very much. But you’ll have to excuse me for now – After a short siesta I have a feeling I am in for more exciting pressie opening! This being 4 is great fun! Fairy’s telly was made by Jenny @ Piggy Palace as a one off, with permission from Helen @ Cosy Cavies – thank you BOTH!

Thank you Aunties Rachel and Alice for my parsley snackette! I love you both 🙂

Thanks Auntie Debra for the gorgeous bear and the most amazingly special card ever!

Thank you Auntie Jenny for my fab party hat, new pawbag, super wonderful bunting and the smashing round whatsit thingy, the garland! And I loved the Big Apple card very much too.

And thank you Daddy xxxx

PS And thank you for the surprise that has just arrived in the post – more about that soon!

Taking Stock!
Smile For The Camera! 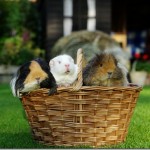 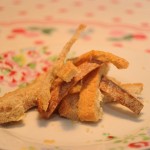 Get A Grip, Daddy!
Push Ups! 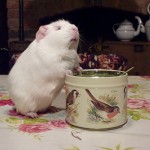