Fairy was born on June 11th 2009. Brillo, her mum, was among five guinea pigs we rescued from an intolerable situation. She gave birth to 3 babies, Fairy, Flash and Jiff, a little boy piggy. It didn’t take long to realise Fairy was blind and a few days after that it was apparent she had no sense of hearing either. She had problems eating too, and no wonder! Her top incisors were non existent and her lower ones projected forward. All her food had to be sliced up into bite sized nibbles and we hand fed her many times throughout the day, every day for probably the first 6 months of her life. For the first week or so it was difficult to encourage her to eat anything at all but gradually she realised how tasty fresh salad and vegetables were, and also how scrumptious fresh picked grass was. Then she discovered hay! Not only could you eat it but you could play in it too!

Her siblings were thriving but Fairy remained around half the weight of them. Her little head with its large pink ear flaps, seemed very narrow and was often tilted to one side. Then there were the occasional ‘seizures’ or ‘fits’. I wasn’t sure what was wrong, and I took her to the vet. After a cursory glance she suggested we ‘put her out her misery’. She wasn’t in pain and it didn’t seem right to end the life of such a beautiful creature without at least understanding what was wrong with her. It was only by trawling the internet after a friend mentioned the term ‘Lethal’ that I discovered exactly what was the problem was.

Fairy is what is known as a ‘Lethal White’ Guinea Pig.  She has a genetic condition due to certain ‘Roan’ genes present in both parents. ‘Lethals’ can often have short, difficult lives and are a lesson to us all that we should never, ever breed from our Guinea Pigs. You can read more about Lethals by searching the Guinea Lynx Forum. This article is very informative too. Casper is a very special Lethal White, her story is also on the Forum.

Careful nurturing, regular trips to a trained Rodentologist for tooth correction, the best food possible, lots of patience and even more important, lots of love, Fairy is now a happy, healthy, wilful, loving and very special guinea pig – she is magic!

Looking back, we didn’t take many photographs of Fairy during the first few weeks of her life. Jiff and Flash, her siblings, were due to go to their new forever home in July, along with their Mum, Brillo. We knew it would be hard saying ‘goodbye’ to this beautiful little family and were reluctant to become too attached to them. 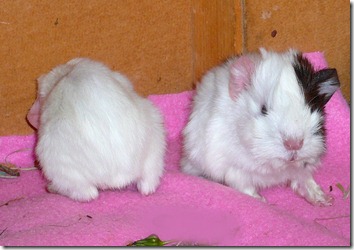 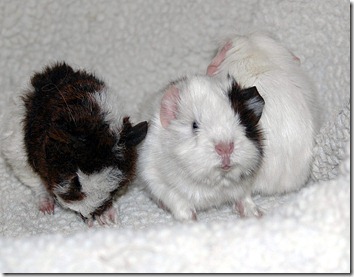 In a different order – Fairy always seemed to be facing the wrong way! 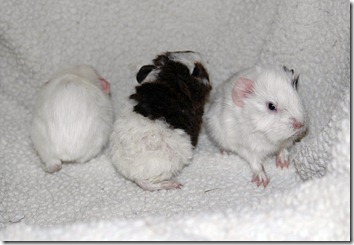 And here she is aged about 4 weeks. 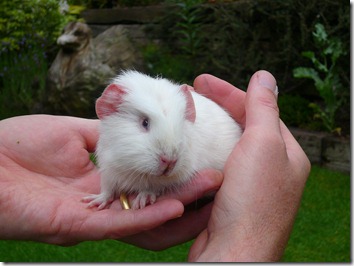 She was very shy! 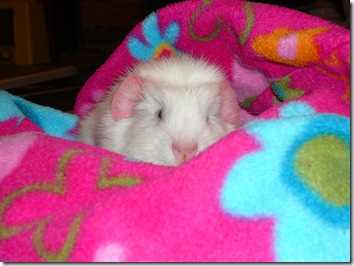 Getting the hang of nibbling some lettuce at 6 weeks of age! 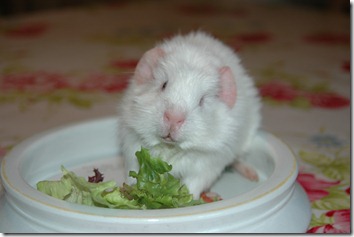 Going for a romp! 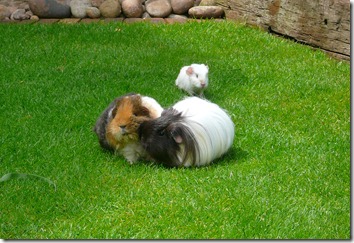 This was a favourite photo from that time. 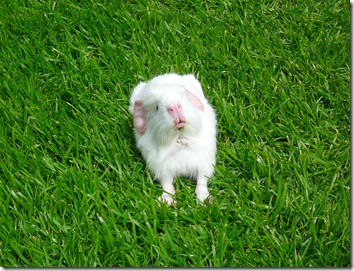 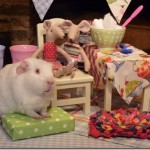 Fairy Has A Request!
Only another 349 days to go until next Christmas! 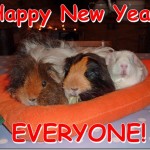 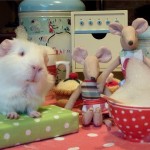 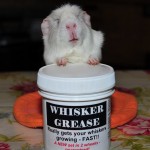